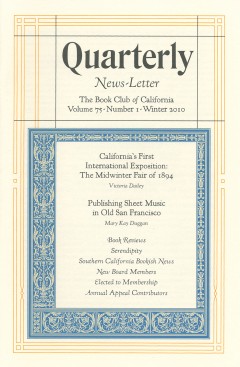 The California Midwinter International Exposition of 1894 was the state’s first international event and as such, was a landmark in her history. Purposely held in winter, it showcased the glorious climate of the Golden State and followed on the heels of the vastly successful World’s Columbian Exposition held in Chicago in 1893. “As compared with less favored regions, California was little known; her changed conditions were little understood; and to make her known, to place her in the rank to which she was entitled among the sisterhood of states, was the main object of the Midwinter Exposition.” (Hubert Howe Bancroft, The Book of the Fair, 1893, p. 975)

The Midwinter Fair was the brainchild of M. H. de Young, San Francisco’s leading civic booster, founder and publisher of the San Francisco Chronicle, and California representative to the Chicago fair, who came up with the idea while at the fair in the summer of 1893. His plan, announced on June 1, that a full-scale fair could open in San Francisco in January, 1894, was enthusiastically received by his colleagues, and the governor of California and mayor of San Francisco were immediately telegraphed, both of whom thought it impossible to construct an entire fair in six months. But de Young forged ahead and was able to secure promises from many of the foreign exhibitors that they would indeed exhibit in San Francisco, and western states and California counties soon pledged as well. Securing 140 acres in Golden Gate Park, the newly formed Midwinter Fair committee proceeded rapidly, and on August 24, a groundbreaking ceremony was held; by mid­­-October, many of the larger buildings were completed. In an imaginative break with prior fairs whose architectural styles were based mainly on classical models (the entire Chicago fair was built in the Beaux-Arts style), the Midwinter Fair encouraged local and exotic styles. As a result, Indian, Egyptian, Moorish, Old Mission and Adobe architectural styles were chosen, imbuing the fair with a festive, original quality, attributes that would come to define California herself. The fair also boasted a modern feature–a huge, 270-foot tall electric tower (which resembled the recently built Eiffel Tower, 1889), atop of which was the largest searchlight in the world, and it was a stunning novelty. The fair did much to attract visitors to California, and, as was stated at the time, “While the rigors of winter are being felt in the Eastern States, California is basking in sunshine, the hillsides clothed with verdure, and fruits and flowers abounding everywhere.” (W.B. Davenport. California Midwinter Exposition, 1894, p. 1.) The fair lasted five months, opening on January 27, 1894, and closing on July 4. The entrance fee was 50 cents, and most buildings, exhibits and attractions cost an additional 25 cents. It was so successful that the profit earned by the fair was used to establish a permanent museum in the Fine Arts Building that later became the M. H. de Young Memorial Museum.

To document this major event, fair organizers chose Isaiah Taber as official photographer. Taber (1830-1912) had become San Francisco’s leading photographer after an almost Horatio Alger-like rise to fame and fortune. Born in Massachusetts, Taber, like many New Englanders, went to sea, joining a whaling expedition to the Pacific in the mid-1840s. Returning to New Bedford, Taber, dissatisfied, followed the rush West upon hearing of the discovery of gold in California. He mined for two years, spent four years as a rancher, and then returned to New Bedford, where he became a dentist. He learned the photographic process in the early 1860s, and set up as a photographer in Syracuse, New York. In 1864 he returned to San Francisco, and by 1871 had a photography studio there. He soon became one of the city’s leading photographers with his landscape views, portraits and urban scenes. In a shrewd move, Taber acquired the negatives of renowned photographer Carleton Watkins in 1876 after Watkins declared bankruptcy in the financial crash of that year; Taber subsequently published many of Watkins’ views under his own imprint. Taber became part of the city’s cultural elite, and, because of his talent and social connections, secured the photographic concession at the Midwinter Fair.

Documenting the entire evolution of the fair, Taber took pictures from beginning to end, from the grading of the site to the finished environment. Taber’s splendid views show the event in all its glory, from its architectural playfulness to its exotic attractions and are noteworthy for their clarity and composition. Realizing that the fair was ephemeral, Taber made his photographs the permanent record of the event. He photographed all of the major attractions including the buildings for Mechanical Arts; Administration; Manufactures and Liberal Arts; Fine Arts; and Agriculture and Horticulture. He also photographed the Electrical Theatre; Japanese Village; Cairo Street; South Sea Islanders Village; Eskimo Village; Hawaiian Village; Gold Rush Mining Camp; Arizona Indian Village; and Dahomey Village. Canada, Russia, China, Italy, France, England, Sweden and Germany all had their own buildings, as did several states and California counties, all of which Taber captured. Apart from these major attractions, he also recorded such fair participants as the Women Gum Sellers, Policemen, and the Mexican Band.

In addition to Taber’s photographs, thousands of souvenirs were produced for the fair. An array of postcards, pamphlets, souvenir glass and china, napkin holders, spoons, handkerchiefs, playing cards, medals and assorted doodads issued forth so that satisfied visitors could take home a memento of this novel event.

The Midwinter Fair was extremely successful and had a lasting impact not only in San Francisco but also in the state’s southern realm: in Los Angeles, civic leaders made plans for a fair of their own during the spring of 1894. The organizers rightly calculated that the many visitors to San Francisco would want to make a journey to Southern California to experience another great attraction, and arrive they did. Thus was born the Fiesta de Los Angeles, the largest event ever organized in Los Angeles to date, and it was a hit; it continued until World War I (with a hiatus during the Spanish-American War). San Francisco was host to another international event two decades after the Midwinter Fair: in 1914, one of the most important events in California history took place there–the Panama-Pacific International Exposition. Although the PPIE was larger and grander than its predecessor, its heritage may be traced to the pioneering Midwinter Fair of 1894.